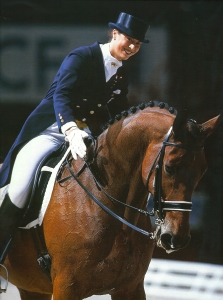 In 1981, when I was 7 years old, I started riding horses in a riding school. At the age of 11 my parents bought me my first pony and from that moment riding became a very important part of my life. Jo Willems, who later became the coach of the National Team, became my trainer and started developing my riding skills. At the age of 15 years I was selected for the Dutch team and we won the gold medal at the European Championships. (Later my sister competed at the European championships with the same pony and won medals too.)

Unfortunately my career ended abrupt by the unexpected death of my father.

Since he was at the age of 4 I’m training Copernicus. His pedigree is Uphill, bred by Gert-Willem van Norel, the Pretendenthoeve. Copernicus is a sweet horse with a superb character. He always wants to work for me and is extremely reliable. He is lovely with his long legs and his 1,76 cm. And thanks to him I got back my confidence in riding when I had a terrible fall back in 2010 riding a horse of one of my students which crushed my ankle.